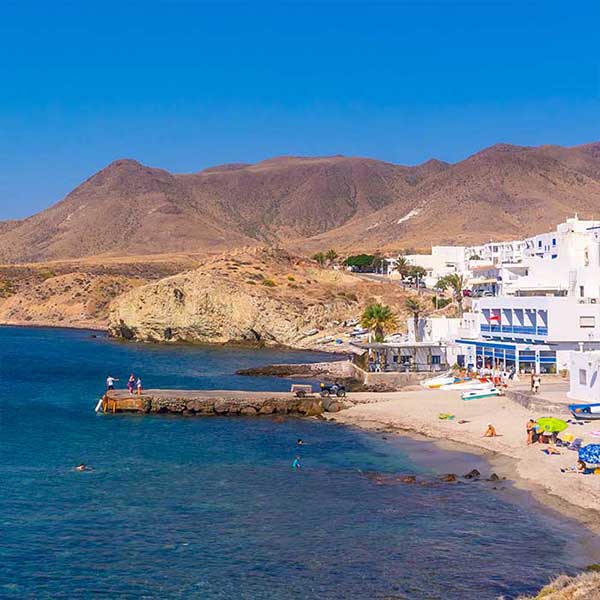 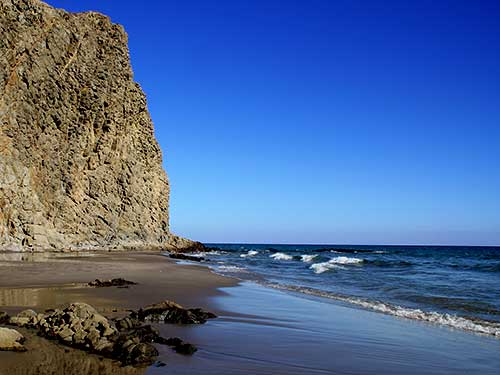 The Natural Park Cabo de Gata-Níjar has the name of Maritime-Terrestrial Natural Park , with protected areas that have 37,500 hectares on land and 12,000 hectares of marine protection. It is the largest Iberian volcanic area and emerged from the seas in different periods between 15 and 7 million years ago, creating a unique landscape in Europe of singular beauty. The sierras, steppes and volcanic domes of the interior dispute the attractiveness of this land with the virgin beaches, secluded coves and cliffs by the sea.

Rainfall with an annual average of 180 liters/year makes it the most arid area in Europe. The annual temperatures are between 18°C and 12°C of winter average and 26°C, of ​​summer average, which together with the more than 3,000 hours of sunshine per year, determine, not only, flora and fauna adapted to these conditions, but also the human constructions, with cisterns, wells, whitewashed houses or roofs with terraces to collect water from the scarce rainfall.

Land of contrasts To the south we find the steppe part of the park that hosts some wetlands of high ecological value, the Salinas de San Miguel, nesting place and passage of different species of birds, and the huge beaches of Las Salinas. The central part of the park is occupied by the Sierra del Cabo de Gata , the vertebral axis of the Park, which runs more than thirty kilometers parallel to the sea with NE-SW direction, with a maximum height of 500 meters. In the northern part of the park, this mountain range disappears into the sea creating cliffs and ravines, among which you can find inaccessible virgin coves.

The land that Cabo de Gata-Níjar occupies is divided between the municipal areas of Almería capital, Níjar and Carboneras , and the most important population centers that we find in the interior of the park are San José ( Níjar), San Miguel de Cabo de Gata (Almería), Rodalquilar (Níjar), La Isleta del Moro (Níjar), Agua Amarga (Níjar) and Las Negras (Níjar).

Ecomuseum: House of the Volcanoes