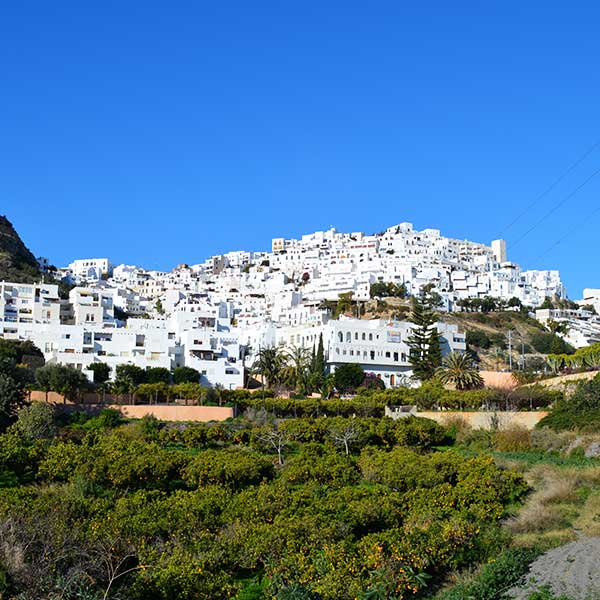 Mojácar is 90 kilometers from Almería capital towards the north, it is located at the end of Sierra Cabrera and it borders to the south with Carboneras and to the north with Garrucha. This population, since 2013, is included in the most beautiful Villages in Spain network , and is that the labyrinth of streets of white houses, reminiscent of Mudéjar architecture, is one of the essential visits of the province. The town is divided into two well-differentiated urban centers Mojácar Pueblo and Mojácar Playa. 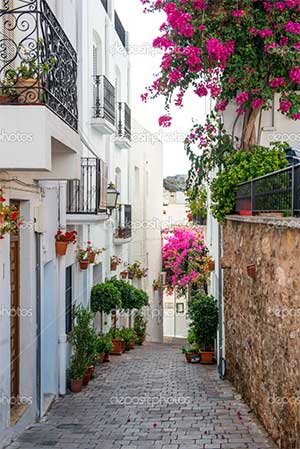 Mojácar Old Town hangs from a hill in the foothills of the Sierra Cabrera, in the distance is a cluster of white houses clustered on a hill that, touching the 200 meters above sea level, served at the origins to defend citizens against attacks from the sea.

Once inside the alleyways are narrow and are flanked by balconies decorated with geraniums of colors that contrast with the pristine white of the whitewashed walls, many are the corners to be discovered in this town that in each corner gives us a little surprise. We are perhaps before the most authentic town in the province of Almeria and it is not surprising that in the sixties a group of intellectuals and artists, enchanted with light, tranquility or apparent detention on a remote time, they made him his refuge and, in some cases, his final resting place, since intellectuals like Frederick Mooney (Fritz), Win Wells, Henry Higgins, Paul Beckett. William Napier, etc., are buried in the cemetery of Mojácar. 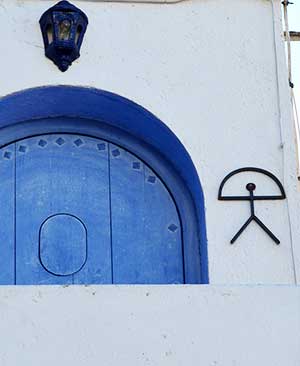 Traditionally the inhabitants of Mojácar painted on the doors of their houses the figure of the Indalo , long before it was called like that, sought protection against the daily adversities. It is for this reason that Mojácar village has traditionally been the Pueblo Indalo .

The Indalo is the talisman of Almería, rock painting found in the cave of Los Letreros and represents a man holding the rainbow with open arms. According to tradition, it drives away the evil eye and brings good luck to those who own it. We will find it everywhere, especially in Mojácar.

Mojacar Beach is built on the coast and is popularly known as the Ibiza of the South for the idle atmosphere, designed for the pleasure and enjoyment of tourists. This part of the town is made up of vacation developments, hotels and entertainment places of almost any kind you're looking for, from restaurants, to cocktail bars, nightclubs or beach bars. In this area we will find the best beaches to take a bath and enjoy the sun and sand.

It is an area that stretches from Macenas beach, to the south, to the neighboring town of Garrucha. The built-up hillsides of Mojácar Playa die gently on an open sea towards the east, in the form of clean sand beaches and extraordinary tourist services. The beaches of Macenas, Ventanicas, Lance, Cantal, Rumina or Marina de la Torre become summer in the holiday destination both for those who pursue tranquility, and those who seek otherwise .