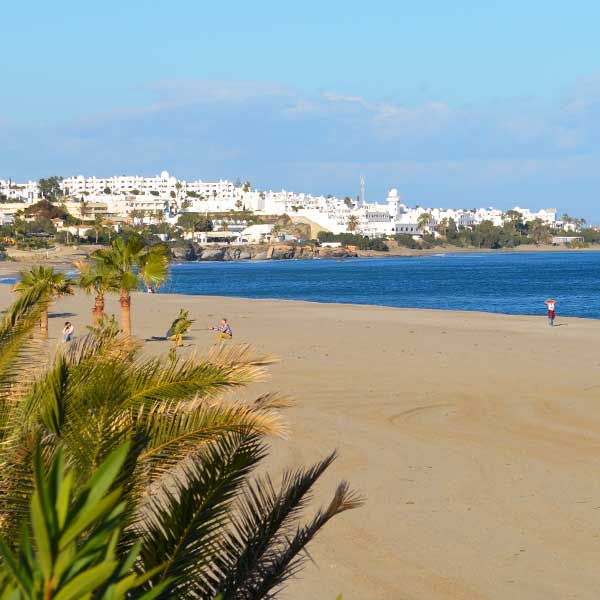 One of the main tourist attractions in Mojácar and the reason why thousands of people spend their summer here are its beaches. The neighborhood of Mojacar Playa extends along 8 kilometers of coastline, mostly occupied by large beaches. In these beaches we will find all kinds of services and options for leisure , blue flag beaches, paddle surf board rentals, beach volleyball courts, accessible beaches, showers, etc.. 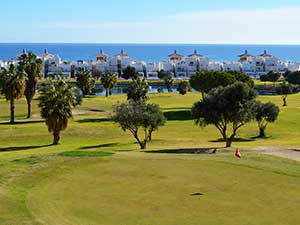 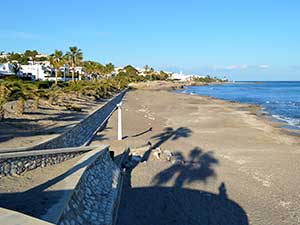 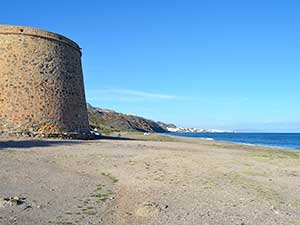 If we are looking for virgin and quieter beaches we will find them to the south of the municipality, in an area of ​​sparsely populated ravines towards Carboneras, where the Protected Beaches can be found, which They are much smaller but have the charm of being in a natural environment. These beaches do not have services. 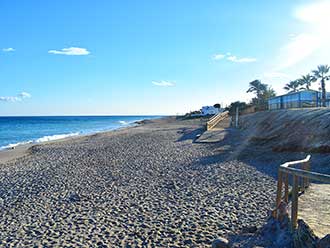 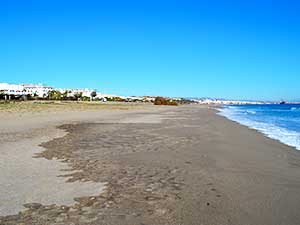 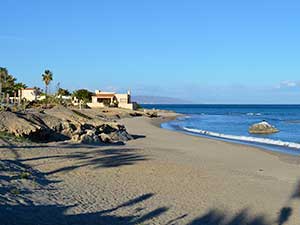 Marina de la Torre is the easternmost beach in Mojácar, near the municipality of Garrucha. It is a semi-urban beach with a high degree of occupation, especially in the parts where the urbanization reaches the beach. It extends from the lagoon of the Aguas River to Garrucha. In the urbanized area there are important hotels like the Best Mojacar or the Hotel Oasis Tropical, it is close to the golf course and in front of the old Marina Palace.

The beach is 1,900 meters long and consists of grayish-grained medium-sized sand . It has the accreditation of Blue Flag due to the services available: handicapped access, lifeguard service, amphibious chair, changing rooms with lavapies, toilets, hammocks, beach bars, children's playground and water sports.

The beach of La Rumina, 1,200 meters long, begins right in the Lagunas del Aguas that form at the mouth of the river and ends at the end of the urbanization of El Palmeral. The Lagoons of the Aguas River are a protected area due to their high ecological value, since they are the residence of many species of birds, amphibians, and typical flora of the lagoons, such as the reed and the reedbeds. It is an urban beach around a residential area of ​​low houses known as El Palmeral and normally the occupation level is high. The composition of the beach is gravel and gray sand in equal parts and consists of services such as rental of hammocks, showers, litter bins and some beach bars or restaurants.

The Descargador Beach owes its name to an old ore loading platform located on the beach, which has now disappeared. The beach is 900 meters long, extends from the restaurant Neptuno Mojacar, which is on the beach, to the information booth at the roundabout with the road that leads to the town of Mojácar. The influx to the beach of the discharger depending on the time of year is average. Sand medium grain and grayish color . It has the accreditation of Blue Flag for its services: access for the handicapped, first aid, changing rooms and toilets, playground, mini golf and beach bars.

The beach owes its name to the huge rock that is stuck in its sand La Piedra Villazar. It is the beach that is in front of the Parador de Mojácar and extends from the junction that leads to Mojácar Pueblo, where the shopping center is, to the Camping de El Cantal. It is a beautiful, and familiar beach, with the Blue Flag accreditation for the services offered: accessible for disabled people , lifeguard service, amphibious chair, changing rooms, toilets, swings, hammocks and chiringuito.

The beach of El Cantal is one of the most popular in Mojácar Playa, it starts in the Campig de Mojácar until after the small cove that makes El Cantal breakwater. Normally the occupation level of the beach is high . Urban beach whose composition is gravel and sand . All kinds of services, dressing rooms with lavapies and toilets, lifeguard service, hammock rentals, sports areas, beach bars, restaurants and night bars on the beach, such as the Mandala Beach Club.

Cueva del Lobo beach is 1,750 meters long by 35 meters wide, is composed of dark sand and has the accreditation of Blue Flag . A parallel promenade runs along the entire beach. It begins in the house built in front of the sea called La Cueva del Lobo, from the first constructions of the area back in the 60s of the last century, and ends at the breakwater in front of the Best Indalo Hotel. Normally the level of occupation of the Cueva del Lobo beach is high.

It consists of the following services: toilets, showers, access to the beach for people with disabilities, rental of umbrellas and hammocks and water sports area. For the smallest, the breakwater area is recommended, since the entrance to the sea is very flat and protected from the waves. It is occupation degree of this beach is high.

Playa Macenas is a secluded beach in Mojácar Playa . In front of this beach a Tourist Resort has been built that includes a golf course, a hotel and apartments. This beach is 1,420 meters long, the level of occupancy of the beach is medium and its composition is rocks and gray sand . The beach of Macenas owes its name to the defense tower that is located on the beach, which was built during the reign of Carlos III, and is part of the defensive battery that was built along the entire coastline of Almeria to protect it from pirate attacks

Protected beaches are the set of virgin beaches that are located west of Mojácar. This stretch of coastline, which links Mojácar with Carboneras, alternates rocky areas with beaches and coves is undeveloped that are intended for the practice of naturism. They are beaches that lack any service, other than cleaning, where practice nudism and you must maintain the utmost respect for the environment and the environment. The best-known beaches are: Cala del Peñón or Perulico, Cala del Bordenares, Cala del Sombrerico, and Cala de la Granatilla. 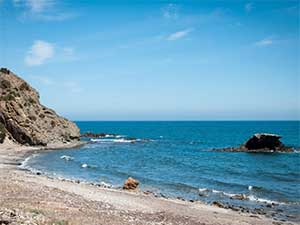 A couple of kilometers from the beach of Castillo de Macenas, towards Carboneras, we find the 600 meters long Sombrerico beach, composed of gravel and sand . It can be accessed on foot or by car, there is only cleaning service on this beach. 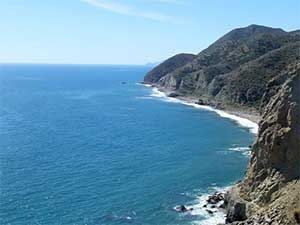 This small beach, only 250 meters long, gets its name from the color of its sand that is reddish brown , almost garnet. To reach it we must take the detour that is in the hamlet of Sopalmo, on the road between Mojácar and Carboneras. The level of occupation of the La Granatilla beach is low and it is likely to meet with people who practice naturism.